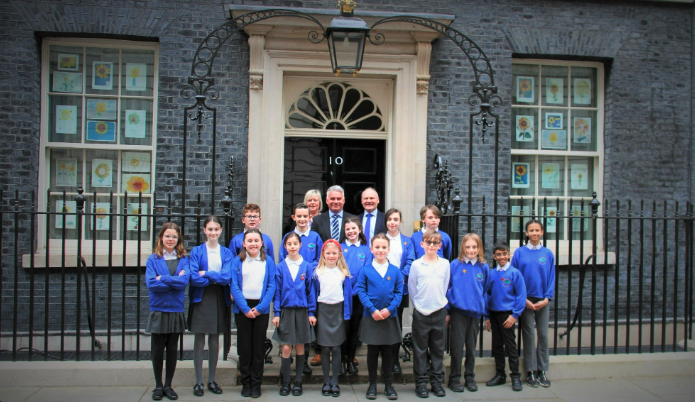 Fifteen children from Sholing Junior School were invited to number 10 Downing Street to meet the Prime Minister and plant a tree in the garden of No. 10 on behalf of Her Majesty the Queen. With a focus on planting sustainably, the Queen’s Green Canopy (QGC) aims to encourage tree planting to create a legacy in honour of The Queen’s leadership of the Nation, which will also benefit future generations – ‘Plant a Tree for the Jubilee’.

As stated by Royston Smith MP: “Their trip to Number 10, to meet the Prime Minister, was a fitting reward to staff and pupils who go out of their way to put other people first.”

Specifically, putting other people first, is in reference to a number of projects undertaken by the school children, staff and families over the last eight years which the school is rightfully proud of. These initiatives are educating the children outwardly and stretching the school community’s contribution far beyond the school grounds.

These projects include the school ensuring a lasting memorial to James Brindley Nicolson VC on the school grounds and Guildhall Square in Southampton, the oak tree planting in the school garden, grown from an acorn found in the grounds of Auschwitz in memory of both Holocaust Memorial Day and Helen Ashton – a friend of the school – who nurtured the acorn so carefully before she died. After many years of hard work, the school is one of the few nationally to be awarded the ‘Modeshift’ Platinum award in which active and sustainable travel is central to the school’s way of educating future generations about saving the planet. It includes the school ensuring Bert Warne, 102-year-old Japanese Prisoner of War was rightfully awarded Freedom of the City of Southampton – the 15th individual in the last 80 years – to recognise his contribution to remembering those who served and died in the Far East theatre of war. Also, it recognises the schools’ commitment to teaching British Values, in particular, democracy through our strong links with Royston Smith MP and the subsequent children’s visits to Parliament and Prime Ministers Question. We also have been promoting women in engineering through a number of projects working closely with Leonardo UK.

All of these projects can be found on our website by clicking Our Learning – PHSE.

The school community aims to continue their support for the refugees leaving Ukraine and work closely with the RNLI through our website to raise awareness of water safety nationally. The school also intends to be a dementia-friendly school over the coming years.